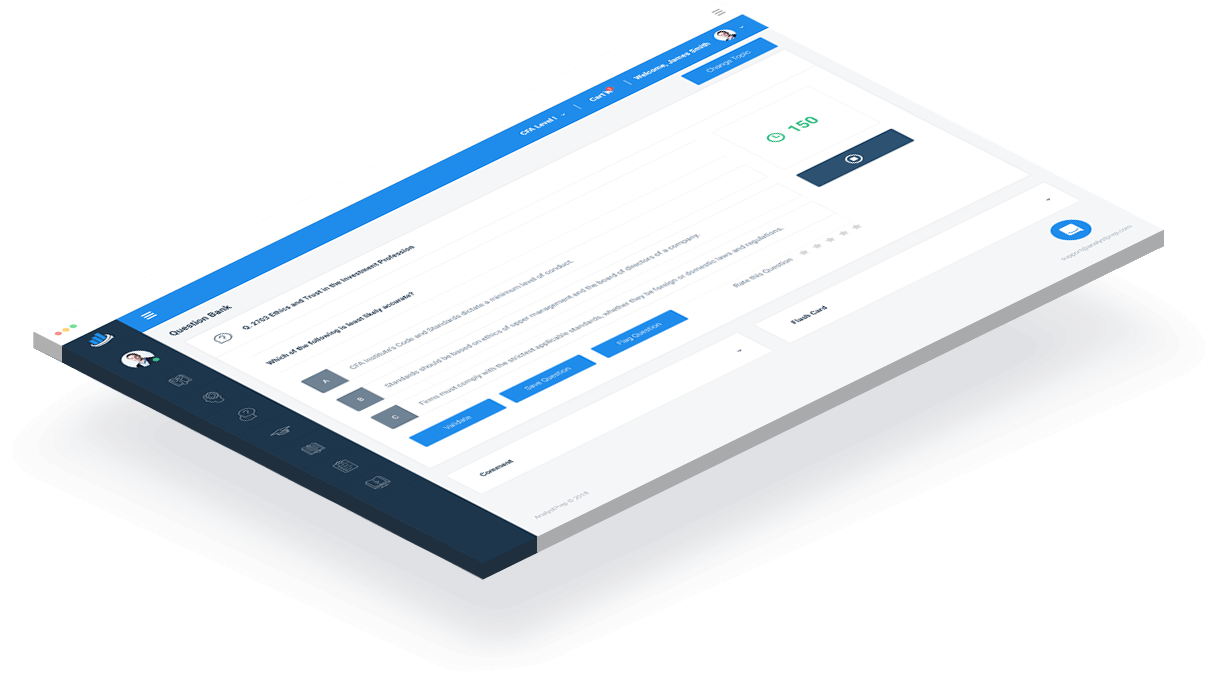 Developed by certified professors with decades of experience teaching EA® content, our question bank contains over 1,000 questions. It takes a lot of preparation to pass. Our instructors know what it takes. Every question is validated multiple times to ensure you get the most out of the platform.

In preparation for the Executive Assessment, you should also familiarize yourself with the types of questions you will encounter during the test. Our quantitative, verbal, and even integrated reasoning questions follow the exact same structure as the actual test. Items usually consist of a stem (question, statement, or table) and five distracters – A, B, C, D, and E.

Our question bank is divided into specific topics for an all-around understanding of the curriculum, just like the video lessons. Each question is accompanied by a detailed solution. If you’d like clarification on a specific concept, our instructors are available 24 hours a day.

In order to maintain consistency with the curriculum and level of difficulty, we regularly adjust all of our practice questions. Join the thousands of candidates who register on our platform every year. 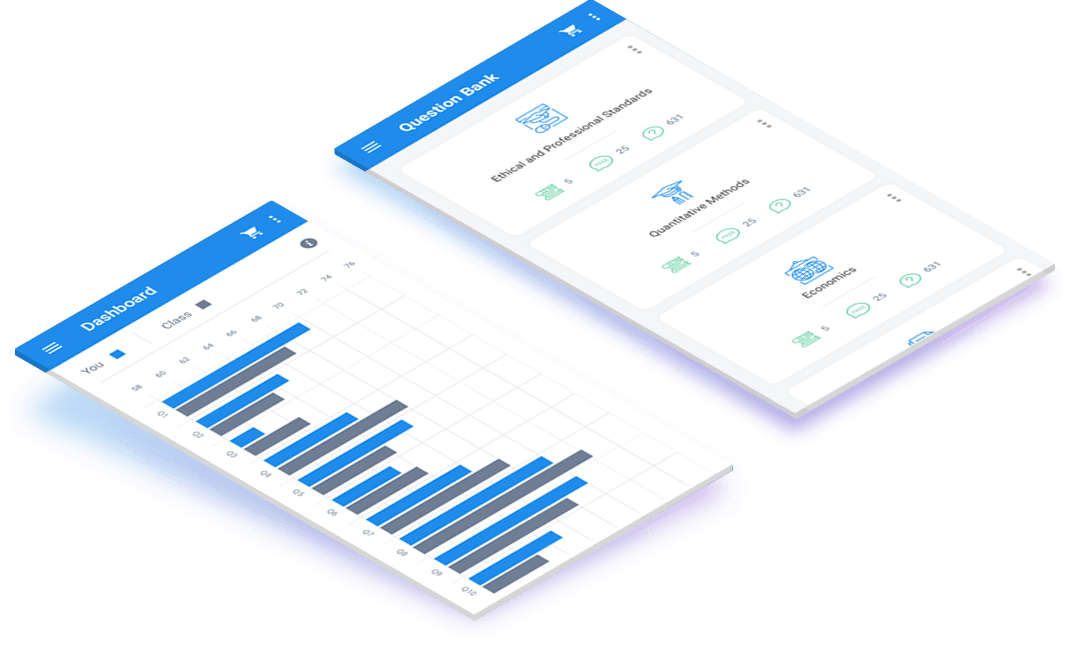 Performance Tracking Lets you Find your Strengths and Weaknesses

There are many topics covered in the EA exam across a broad range of skills. Test your knowledge by using the practice questions in each specific area to determine where you excel and where you need improvement. With our FREE performance tracking tool, you can monitor your progress and track your performance over time.

We offer a complete set of analytics tools that provide valuable insights into your performance, including the ability to compare your results to more than 50,000 users worldwide. Make adjustments to your study plan according to the results and revise the topics that need to be improved. You must know which topics require more effort if you want to maximize your chances of scoring well.

Questions Answered by our Users

Try it for free

The correct answer is: B)

(1) To find the value of x requires a single value for x or y. This statement only provides a minimum value, and so the question cannot be answered; NOT SUFFICIENT.

The correct answer is B; statement 2 alone is sufficient.

The correct answer is: A)

The correct answer is A; statement 1 alone is sufficient.

Three-quarters of a cylindrical tank is filled with water. What is the area of the tank’s surface that is in contact with the water?

The correct answer is: E)

(Together) Both statements produce the same equation \(r=\dfrac{h}{6}\) for two unknowns; NOT sufficient.

The correct answer is E; both statements together are still not sufficient.

The correct answer is: E)

Bees play important roles in the environment, including germinating agricultural crops, such as apples, melons, and cranberries; supporting food supplies of wild animals by pollinating berry-, seed-, and nut-bearing plants; and produce honey, a nutritious food for animals, insects, and humans alike.

A) supporting food supplies of wild animals by pollinating berry-, seed-, and nut-bearing plants; and produce

B) supporting food supplies of wild animals by pollinating berry-, seed-, and nut-bearing plants; and they produced

A. In this sentence, the third member of the list does not maintain the –ing verb form that the two previous members use.

B. In addition to not maintaining the –ing verb, this option includes a subject (they) while the other members do not, again violating parallelism.

C. Correct. The sentence communicates a list of roles bees play in the environment and maintains the parallel structure for all items in the list.

D. The insertion of yet instead of and illogically suggests that the bees’ ability to produce honey contrasts the other items in the list.

E. The elimination of and makes producing incorrectly modify the first two items in the series.

This is an age where ephemeral work will likely even endure far longer than was once possible, at least in some form.

A) where ephemeral work will likely even endure far longer

B) in which even ephemeral work will likely endure far longer

C) where even ephemeral work will likely endure more

D) in which ephemeral work will likely even endure more

The correct answer is: B)

A. No. The modifier “even” cannot modify the verb “endure”, and the specific pronoun “where” must refer to a place.

B. Yes. The modifier “even” properly modifies the noun “ephemeral work” and the pronoun phrase “in which” can describe “an age”.

C. No. The modifier “more than” does not properly refer to duration of time and the specific pronoun “where” must refer to a place.

D. No. The modifier “more than” does not properly refer to time.

E. No. The specific pronoun “where” must refer to a place and the modifier “more than” does not properly refer to duration of time.

In 2002, Jada Harris received a call from a student at East Carolina University, who was returning panels of the AIDS Memorial Quilt that had been temporarily displayed at his school. Harris, director of programs at the NAMES Project Foundation, which manages the Quilt, vividly recalls the conversation. The young man, who represented an African-American student group, nervously asked whether next time, the organization could send over panels that didn’t just represent “old white guys,” as he had phrased it.

Later, as Harris looked through the Quilt’s database, she realized that there were less than 300 individual panels made for African Americans who had died from HIV/AIDS. “I was just flabbergasted,” she said.

Like the disease, the Quilt had emerged within the white, gay, male community, which suffered the overwhelming majority of AIDS deaths during the early years of the epidemic. The first panels were sewn in San Francisco in 1987, each one bearing the name of a life lost to AIDS. The Quilt had been developed as a way to memorialize loved ones, and to salvage some sense of creation and beauty from the devastating loss.

And yet, new quilt panels continued to predominantly reflect the disease’s original demographics. “We as a nation weren’t necessarily recognizing that HIV and AIDS were impacting every sector of society,” said Julie Rhoad, executive director of the NAMES Project, which moved its headquarters from San Francisco to Atlanta in 2002. “And the Quilt was a reflection of that.”

In response, the NAMES Project launched Call My Name in 2003, which was later funded by the NEA. Although the Names Project has always hosted panel-making workshops, Call My Name workshops specifically target the African-American community, bringing people together to collectively grieve while creating a tribute for a loved one. While the workshops raise awareness in and of themselves, the panels they produce help ensure the Quilt remains a relevant and effective public health tool.

“It’s important that people see people that look like themselves, so they will understand that this disease doesn’t have any respect of person,” said Harris. “Everybody is represented on the Quilt, but unless the Quilt tells your story, it’s hard for people to see that there is a possibility that they could be at risk.”

Question 1: Which of the following best describes the trajectory of the passage?

A) A series of proposals are put forward concerning the best way to address a crisis; one such proposal is approved and acted upon.

C) Attention is called to a disconnect between the way in which a crisis has been memorialized and the reality of that crisis; steps are taken to resolve that disconnect.

D) Several possible responses to a crisis are evaluated; no solution is immediately reached.

A. No. This choice is unsupported by the passage, since there is no evidence to suggest that a series of proposals was put forward.

B. No. This choice is unsupported by the passage, since there is no evidence to suggest the inclusion of African-American names in the quilt was questioned.

C. Yes. This choice clearly summarizes the flow of the passage. Attention is called to the lack of African-American representation in the AIDS Memorial Quilt; Call My Name is a response to this oversight.

D. No. This choice is unsupported by the passage, since there is no evidence to suggest that several responses were evaluated.

E. No. This choice is unsupported by the passage, since the passage does not present research that confirms conventional wisdom about the AIDS crisis.

Our EA® prep packages start as low as $149 with the Learn Package, or the Practice Package.

You can combine both tools with the Learn + Practice Package for $249.

“Thanks to your program I passed the first level of the CFA exam, as I got my results today. You guys are the best. I actually finished the exam with 45 minutes left in [the morning session] and 15 minutes left in [the afternoon session]… I couldn’t even finish with more than 10 minutes left in the AnalystPrep mock exams so your exams had the requisite difficulty level for the actual CFA exam.”

“I loved the up-to-date study materials and Question bank. If you wish to increase your chances of CFA exam success on your first attempt, I strongly recommend AnalystPrep.”

“Before I came across this website, I thought I could not manage to take the CFA exam alongside my busy schedule at work. But with the up-to-date study material, there is little to worry about. The Premium package is cheaper and the questions are well answered and explained. The question bank has a wide range of examinable questions extracted from across the whole syllabus. Thank you so much for helping me pass my first CFA exam.”

/ Level II of the CFA® Exam

“@AnalystPrep provided me with the necessary volume of questions to insure I went into test day having in-depth knowledge of every topic I would see on the exams.”

“Great study materials and exam-standard questions. In addition, their customer service is excellent. I couldn’t have found a better CFA exam study partner.”

/ Level II of the CFA® Exam

“I bought their FRM Part 1 package and passed the exam. Their customer support answered all of my questions when I had problems with what was written in the curriculum. I’m planning to use them also for the FRM Part 2 exam and Level I of the CFA exam.”

“I bought the FRM exam premium subscription about 2 weeks ago. Very good learning tool. I contacted support a few times for technical questions and Michael was very helpful.”

Hit enter to search or ESC to close